Parallel plate oil/water separators are devices that permit the removal of oil from a waste stream by allowing the oil droplets to rise out of the hydraulic flow path of the separator, thereby extracting them from the waste flow. In theory, the flow through velocity (V) of a vessel is a function of the vessel size and flow rate (gpm). The velocity is then compared to the rate of rise of the oil droplet and the length of the vessel. If the resulting calculated trajectory (T) of a given droplet will allow it to rise out of the effluent flow path before it reaches the vessels exit, it is removed. This is an application of Stokes’ Law and terminal velocity to the rate of rise of a particle in a liquid medium.

In 1845, an English mathematician named George Stokes first described the physical relationship that governs the settling solid particles in a liquid (Stokes’ Law, 1845). This same relationship also governs the rising of light liquid droplets within a different, heavier liquid. This function, simply stated is: 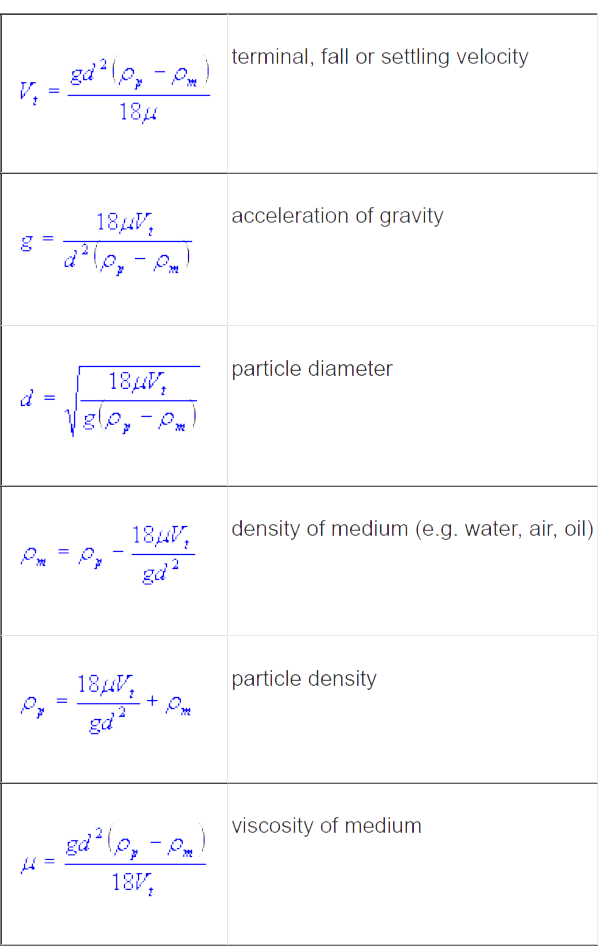 Assumptions Stokes made in this calculation are:

The rise rate of oil droplets is also governed by Stokes’ Law. If the droplet size, specific gravity, and viscosity of the continuous liquid are known, the rise rate may be calculated.

Calculation of rise rate by this method is a gross simplification of actual field conditions because oil droplets are not all the same size, and they tend to coalesce into larger droplets. Furthermore, inevitable turbulence within a separator makes an orderly rise of very small droplets impossible.

Droplets will rise following Stokes’ Law so long as laminar flow conditions prevail. When the particle size exceeds that which causes a rise rate greater than the velocity of laminar flow, the flow around the droplet (as they rise) begins to be turbulent. Particles of this size and larger do not rise as rapidly as would be expected from calculations based on Stokes’ Law because of the hydrodynamic drag. They do, however, rise very quickly in relationship to smaller droplets, and will be removed by a properly designed separator.

Very small particles, such as those of 10 microns (micrometers) and less in diameter, do not rise according to Stokes’ Law (or hardly at all) because the random motion of the molecules of the water is sufficient to overcome the force of gravity and therefore they move in random directions. This random motion is known as Brownian Motion. Fortunately, the volume of a droplet decreases according to the cube of the diameter, so these very small droplets tend to contain very little oil by volume. And unless there are large, large quantities of very small droplets (such as would be present with an emulsion or created by using a centrifugal pump to pump the water) they contain negligible amounts of oil.

The separation process can be accomplished and enhanced in a variety of ways and with a variety of equipment configurations. One common way to improve separation without increasing the need for floor space is to install a multiple plate pack that will create many separation chambers in one vessel, each with a shallow depth. This is done by adding a series of appropriately spaced plates. The flow is distributed through the plates and the rate of rise of the droplet is applied to the application. The advantages of multiple plates is that surface area is increased without requiring additional floor space.

The most efficient oil/water separators are designed to exploit Stokes’ Law and the rate of rise for a given droplet. In order for a particle to be removed according to Stokes’ Law, the separator must conform to several critical design criteria:

There are several important factors to consider in efficient parallel plate oil/water separator design. As stated earlier, the parallel plate must have a smooth surface in order to allow unhindered migration of the droplet to the top of the pack and solid particles to the bottom. Another enhancement is to use cross corrugated plates. Corrugated plates provide additional coalescing surface area, within the same volume, in the form of crests and valleys that aid in the migration of the droplet to the top of the pack. As the droplets impinge on the crests and valleys and begin to migrate toward the top of the plate pack, they will coalesce with other droplets, thus creating larger droplets with increased mass which will improve their rate of rise.

HydroFlo Tech employs parallel plates in a most efficient manner. We use ultra-smooth surface, cross corrugated plates, that are arranged at a 60 degree angle of inclination. This promotes self- flushing and efficient droplet agglomeration, which improves the migration of droplets toward the top of the plate pack, and sludge to the bottom of the plate pack and out of the waste stream into the sludge settling chamber. Our influent and effluent flow distribution systems are carefully designed to ensure efficient, even and complete usage of the entire plate pack and to prevent short circuiting. In summary, our parallel plate oil/water separators are thoughtfully designed to ensure reliability and performance. We also offer custom design services to meet specific requirements.

Much of the performance of an oil/water separator depends on the influent conditions, because equipment or conditions that cause small droplet sizes in the influent to the separator will cause requirements for a larger separator to accommodate the additional time required for the smaller droplets to coalesce.

Emulsifying agents such as soaps and detergents greatly contribute to small droplet sizes, in addition to disarming coalescing plates and discouraging coalescing.

Ideal inlet conditions for an oil/water separator are:

Note: Most separators are provided with an inlet elbow or tee inside the separator, pointing down. This is an exception to the above rules and is intended to introduce the influent water below the oil layer on the surface, thus avoiding disturbances of the surface oil and possible re-entrainment of some of the already separated oil.

Gravity flow conditions are not often obtained, except in sanitary sewer systems. In stormwater, or some process water applications, a positive displacement pump such as a progressive cavity type pump may be used because they provide minimum disturbance of the fluid. The best choice, if gravity flow is not available, is a progressive cavity-type pump.

Inlet piping should be as smooth as possible to avoid turbulence caused by pipe roughness. Smooth PVC is preferable to rough concrete.

Sometimes anti-emulsion chemicals are utilized, but extreme care must be exercised in the use of these chemicals to ensure that they do not make the emulsion worse, instead of improving it. Plant operators have a tendency to believe that if a small amount of anti-emulsion chemical is good, then a really large amount is better. It is necessary to provide sufficient operator education to avoid this problem, and best to avoid use of such chemicals.

If large quantities of solid particles are expected, it is wise to provide a grit removal chamber before the stream enters the separator. These chambers should be designed according to normal design parameters for grit removal as used in sanitary sewer plant design.

Effluent designs are also important in the operation of oil/water separators.

Downstream piping and other facilities must be adequately sized to process the quantity of water (and oil) from any likely event. Manholes overflowing during a heavy rainstorm will surely cause any oil caught in them to be re-released into the environment.

Effluent piping must be designed with siphon breaks so that it is not possible to siphon oil and water out of the separator during low flow conditions.

Oil must be removed from the separator on a regular basis, preferably continuously. If not removed in a timely manner, this oil may fill the separator, blinding the media and causing high effluent oil contents. It may eventually become re-entrained at the next rainfall event and reintroduced into the environment.

Removing the oil from the separators is not enough to protect the environment; it must also be recycled to ensure that it is not merely treated as a waste and to avoid possible problems elsewhere from improper disposal. Current law can hold the owner of the oil/water separator responsible if the oil is not properly disposed of, even if the owner had paid for proper disposal.