Design and Sizing of an Oil/Water Separator

Below is a reprint from section 5 of “Public Works Technical Bulletin 200-1-05”. The entire bulletin should be reviewed by anyone considering the purchase of an oil water separator or separation system.

5. Installations Should Not Rely on Manufacturer’s Literature or Claims To Determine Separator Performance.

a. Purchasers of oil/water separators are often ignorant of the device’s capabilities and constraints. They do not know which types of separators will provide the desired results for a particular application and rely on manufacturer’s literature or sales representatives for unit evaluation. However, vendor literature normally does not address important characteristics such as highly variable flow rates and variations in suspended solids and oil concentrations. Rather, performance is advertised according to ideal conditions of consistent flow and oil concentrations, and no other contaminants present. There are no industry standards that manufacturers must meet. This has resulted in a large number of prefabricated separators hitting the market. Many of these manufacturers are making unsubstantiated claims about their product’s performance capabilities. Often times, performance tests are performed under unreasonable conditions.

c. A related incident occurred at an Army installation involving a manufacturer loosely interpreting the terms of a contract. The purchasing agent wrote a contract for the purchase of several prefabricated separators with coalescing plate packs to be installed at various Army Reserve centers. The contract specifications called for a minimum spacing between plates of 3/4 inch. One company bidding on the contract supplied drawings and specifications stating their plates had a nominal spacing of 3/4 inch. This company was the lowest bidder and was awarded the contract. However, another company, who had also bid on the contract, obtained copies of the specifications through the Freedom of Information Act, and contested the awarding of the contract. Upon closer examination of the drawings, it was noted that the spacing between the plates was less than 0.65 in., certainly less than the minimum requirement of 0.75 inch. The agent contacted the company, who offered to adjust the plate spacing to bring the separator within spacing specifications. They kept the contract.

d. Many manufacturers attempt to provide a scientific basis for their performance calculations by presenting an oil droplet size distribution, and then suggesting that such a determination can be made by using the Susceptibility to Separation (STS) test described in American Petroleum Institute (API) Publication 421. The STS test does not produce such data. Manufacturer’s literature will often depict data concerning oil droplet size distribution based on percentages of droplets greater than specific micron sizes. However, there is no known or recognized analytical procedure that will provide this information.

e. It is imperative that installations purchasing oil/water separators write their contract specifications carefully and in as much detail as possible. This means understanding as much as possible about the content of the process stream (see para. 2d) and the capabilities of various separator types. Unfortunately, very little definitive guidance is available that describes various separator configurations and what level of performance to expect from that configuration. To ensure that the separator being installed will meet performance expectations, enter as much information as possible into the contract specifications, including influent characteristics (to the extent known) and PWTB No. 200-1-05 5 December 1997 A-13 specific effluent requirements. Also include some type of testing requirements or quality assurance measures for after the separator is installed. This testing should represent worst case operation of the separator, not just ideal operating conditions.

SPECIAL NOTE:
In 5-d above it states that API-421 does not generate data in regard to oil droplet size distribution, and this is correct. In the HydroFlo “Test for Determination of Susceptibility of Separation of Oil From Water in a Gravity Type Oil Water Separator” we have expanded on the API bench test to give you a reasonable procedure for calculating the removal efficiency required to meet your target effluent quality.

Oil water separators are typically considered very simple devices. However, several factors that could potentially affect safety, efficiency, and proper management must be given careful consideration prior to the installation or modification of any oil water separator or separation system: 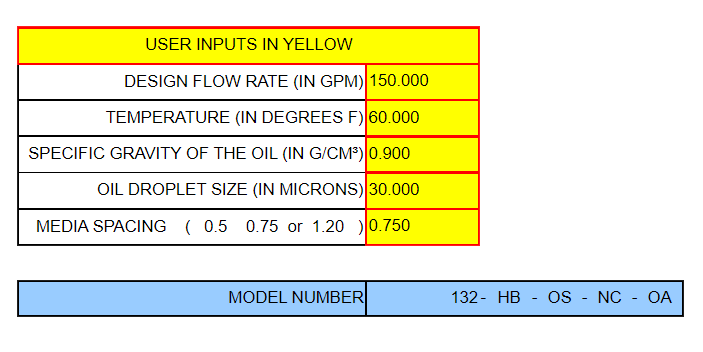 The only change in the above spreadsheets was the micron removal efficiency “OIL DROPLET SIZE (IN MICRONS)”. All other variables remain the same.

Both examples are suitable for 150 gallons per minute. Both examples will remove the target oil with a specific gravity of .90 and less. The real world difference between the two is that the first example will be far more efficient than the second.

This example should reinforce the importance of accurately conducting the “Test for Determination of Susceptibility of Separation on Oil From Water in a Gravity Type Oil Water Separator“. If you size a separator without knowing the target removal efficiency, you will end up greatly over sizing the separator, because you will need to err on the safe side, and size the separator for maximum efficiency.

Following are the definitions and categories of different oil droplet sizes as defined by the “American Petroleum Institute” in the mid 1970’s.

2. DISPERSED OIL: Oil droplets from 20 to 150 microns in diameter

4. CHEMICALLY EMULSIFIED OIL: Oil droplets less than 20 microns in diameter with a chemical bond to other molecules

Most manufacturers of oil water separators make the following statement…

The oil/water separator proposed is sized according to the American Petroleum Institutes Publication No. 421 formula for Oil Water Separator sizing. This separator will remove virtually all free and dispersed oil from the wastewater. The effluent shall contain less than 10 mg/l of oil droplets greater than 20 microns with a specific gravity of 0.85 or less…

While this statement can be substantiated today by inserting a set of variables into some basic formulas, it is interesting to note that the removal of any oil droplet diameter can be solved mathematically. But, just because it is calculable does not mean that it will perform that way in the real world.

A Little History:
The above statement, in it’s basic form, was first penned by AFL right after the first API publication on the sizing of oil/water separators hit the street. I worked at AFL in the late 70’s and was friends with Mike Lynch, one of the founders and the head of engineering. I later worked for Mike at Great Lakes Environmental and was in charge of developing GLE’s standard product line, one of them being their line of oil/water separators. We had a number of conversations in regard to this topic and the above statement. It is interesting to note that, according to Mike, they never tested or proved this statement. No tests of any kind were ever conducted in any way, shape or form. They relied solely on basic Stokes’ Law calculations.

The rule of thumb that they developed for separator sizing was 2 GPM per cubic foot of media…period… regardless of specific gravities involved, oil droplet removal efficiency, etc. In fact, I believe that the separators developed by Mike and myself with AFL and Great Lakes Environmental are still being manufactured today. In exactly the same manner. Using exactly the same criteria. 2 GPM per cubic foot period.

HydroFlo was the first company to start applying the formulas found in API 421, requiring sizing a separator based on varying specific gravities and oil droplet removal efficiencies. We published a little DOS based program and distributed literally thousands of copies worldwide.

Even though it is possible to run the calculations for removal of a 20 micron oil droplet, or even smaller, the conditions have to be perfect to actually achieve it in the real world.

The chart at the right illustrates the comparative difference in the volumes of oil droplets ranging in diameter from 20 to 150 microns.

Below is the conversion from microns to decimals of an inch.

Even a 150 micron oil droplet is less than twice the diameter of the typical human hair.

The difficulty in separating oil droplets in the 20 micron range is that their mass is not great enough to overcome the droplet’s surface tension. The droplets bounce off each other like so many marbles, unable to coalesce with other oil droplets or onto the surface of any coalescing media. Any trace of surfactant or emulsifying agent makes the process even more difficult. In actual practice, separation of oil droplets down to the 30 to 40 micron range is a realistic goal for any enhanced gravity oil/water  separator.

If you do come across someone who says that their separator will “remove 99% of all oil droplets greater than 20 microns” ask them for quantifiable supporting tests to prove the claim. They will respond with supporting calculations, but no one will respond with any quantifiable study supporting the claims. Many can supply influent and effluent test results showing the total change across the separator, but no one will be able to supply information on the particle distribution and actual removal efficiencies.

The final step is to insert the data into the appropriate oil/water separator sizing application.

If you go to 10 different oil/water separator manufacturers and ask them to size a separator for a specific application, without giving them a written specification. For that matter, even when a written specification is supplied, you will get 10 different answers. Everyone bases the efficiency of their separator on their separator’s projected surface area. But, other design variables are all over the map. Plate spacing will vary from as little as 3/8″ to 2″, and more. The angles and configurations of the plates are vastly different from manufacturer to manufacturer. Overall separator volume from the largest to the smallest designs can fluctuate as much as 150% or more.